The Video Production Process: How to Make a Film

Most people have got an idea of the different steps that go into making a video. Here, we thought we'd take a moment to outline each of these, so that you can see how it all fits together as part of a complete video production process. Of course, the way different companies, producers and teams make films might be slightly different. However, the general principles explained below should ring true.

We made a film about this many many moons ago. Lots of the Casual Films team featured in this video have moved to new pastures. Those of us who have remained are slightly greyer, slightly more wrinkled and less annoyingly youthful (ish), but our video still gives you a thorough grounding in the process:

So what does the video production process look like?

Simply put, we need to think about what we’re going to produce, organise it, produce or create it and then share it. This means that productions break down into the following four stages:

Related: Want to make a corporate video? Check out our post on the Five Phases of Corporate Video Production.

This is where we do all the work to understand what the right video to create is. This pre-creative/brief-writing stage is arguably the most important in the whole video production process. This is often not given enough time in the desire to get on with the hands-on project. Needless to say, clear insight gained here is far cheaper to put into action than that gained when the film is finished and delivered. It is remarkable how many times I have made films with global brands, only to reach the end of the process and have someone who wasn’t consulted early enough ask, “Why are we making this, anyway?”

Want a little help creating effective briefs? You can download it right here.

Once we have a clear brief, we can start to think about how you are going to achieve all those objectives. This is known as creative or scripting. Creative tends to go through a number of iterations, until everyone is happy with it.

Once we have an agreed creative idea, we can start to organise all the things that are required to accomplish it. This will include an outline of the different actors/interviewees, props and locations. Making a film is very similar to organising an event. The event of physically making the film is called production.

The hands-on video production is usually a relatively short process compared to the rest of the project. It is also often the most expensive stage in the project. This is because we can have lots of people in the same place at the same time. As we covered earlier in the book, the cost of the production phase has come down drastically since the days when scores of crew were required to get a decent-looking result. Today, a single self-shooting director/filmmaker can achieve a surprisingly high-quality output. That said, there are still elements that can add to the cost of the project. These include a large number of actors/extras, shooting in locations that require travel/accommodation for the team, and specialist production elements such as drones, underwater cameras and cranes.

Once it’s all been shot – ‘in the can’, if you like – the film then goes into the edit. An editor goes through all the material that was gathered during the production phase and selects the best moments from what could amount to hours of material. Many purists argue that this is true filmmaking, as it’s only in video post-production that the film is actually made.

The first step is to get to an initial assembly cut. This is made up of all the best shots, which are pulled into a basic running order. This is also called a rough cut. The film now goes through a series of back-and-forths between the editor/producer and the various project stakeholders. If the editor is ‘chunking’ (splitting) the video for a number of different edits to be shared on social channels, they'll tend to work on one main output, to get that right before moving on to the other cuts. This allows the editor to familiarise themselves with the footage, and to establish a style that the stakeholders are happy with. 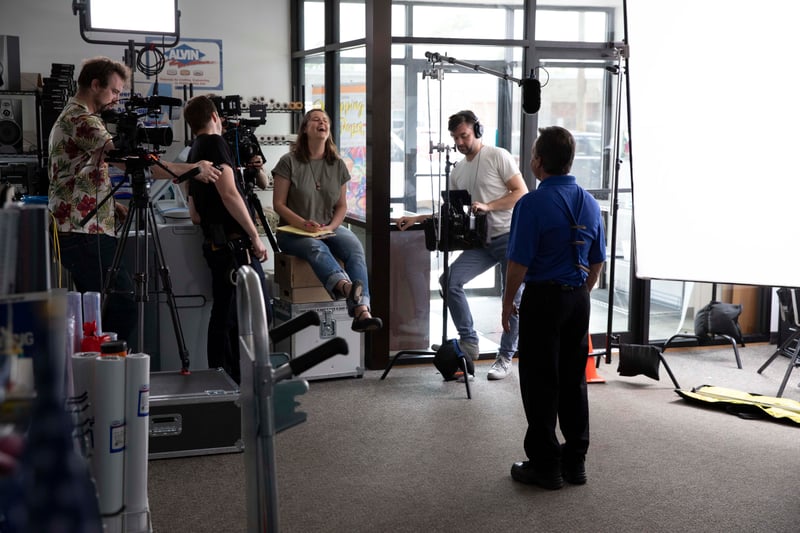 One video production, three films?
It is said that, in the process of making a video, the creators actually produce three films: there is the film that was initially conceived in the creative phase, the film that they believed they shot during production and then the film that is actually there once the editor has finished his/her work. Needless to say, it is the third film that remains to be shared and known by the world beyond the production team. This trope underlines an important aspect of the video production process: be clear on what you are trying to achieve, but be prepared to incorporate positive additions as they occur. It is almost impossible to plan for every single eventuality that might befall the production. The best work comes from taking the events that occur – a beautiful sunset, a perfectly timed bird flying through the shot or an accidental nudge of an edit that just works – and being ready to integrate them.

Finishing the video
Once the project sponsor is happy with the edit, it is sent for a few final tweaks. At this stage, the titles, graphics and any final visual flourishes are added to the film. The picture is then considered to be ‘locked’. This means that no one can make any more changes to the project’s visuals.

Then, the edit is colour graded. This step tweaks and stylises the colours to make sure that they are all uniform and stylistically fit the story. For example, adding a blue hue to scenes filmed at night.

Sound design
The film is then sent to have the audio finished off. This includes having any sound effects and composed music added. Then, the sound designer tweaks all the levels of the audio to make sure that the volume is consistent, the dialogue is audible and it all sounds right. With modern content becoming as disposable as it has, this may not happen on every video production. In that case, it comes down to the editor to give the film a once-over to make sure it is all good instead.

We now have the finished output, but the whole process has been for nothing if the target audience don’t get to see it. This is where the delivery method comes in. There are many, many different ways of getting your content seen, from Facebook banners to bus-mounted video screens. What is really worth doing, though, is including the distribution method in the briefing phase. This allows the video production process to be tailored to make the most of the displays that the outputs will be shown on or the different ways that people view each platform.

To learn about the important role that video plays in recruiting top talent, read the Casual Films Recruitment Video Guide. We’ve also written a guide for marketing gurus who want to leverage the power of video content. Learn more about that, and the video production process, in our Guide to Brand Video Process and Production.

Whatever you're trying to achieve with video, our team of experienced producers are standing by to help you get there. Drop us an email or leave some details here and one of them will be happy to give you a call back to discuss your requirements.