These words by Sir Ridley Scott, one of the greatest living filmmakers and storytellers, opened the New Directors’ Showcase at the Cannes Lions in 2018.

Stories are all around us. We use them to entertain, to amuse and to inform. They also underpin nations, companies, families, teams and even money. Storytelling has become a buzzword in corporate communications. And, as a video communications agency, we can attest to its ability to drive powerful business change. A search on LinkedIn finds that nearly 800,000 people describe themselves as storytellers, or list storytelling as a skill. But there is a good reason for this.

Stories are central to how we define our reality. They define belonging, and the concept of ‘them’ and ‘us’. This is because every cultural arrangement relies (no matter how loosely) on a shared set of understandings. This makes an understanding of stories essential for those interested in creating and strengthening cultures of any kind.

What is a story?

Simply put, a story encapsulates cause and effect. Our brains link facts — A leads to B, B leads to C, and so on. This gives rise to the three-act structure: the ingredients, the reaction and the outcome. This is a more effective form of communication than just giving facts because it mirrors how our brains have evolved to process information.

Story structure activates the brain in a way that simple facts do not:

“Sarah drank from that smelly stream and she has been in bed, writhing in agony, ever since.”

When we hear the facts linked as a story, we can’t help but visualise Sarah’s experience. This creates an emotional reaction over and above the simple facts and embeds it into our brains. Because of this, information relayed as a story is more likely to be remembered than the same information shared as bare facts.

Conflict is essential to great stories…

Good stories are about conflict; they include a degree of jeopardy in the achievement of the effect or outcome (i.e. A plus B could lead to C, but it could also lead to D, E or F). The greater this unpredictability or jeopardy, the more powerful the emotional connection, and therefore the greater the impact of the story.

This gives nearly all great stories a recognisable structure. Look at any of the great myths – ancient or modern – and you’ll find the personable figure of the underdog, who sets out against great odds to achieve a significant (and almost unattainable) goal. In doing so, they enhance themselves and grow. In his excellent book Into the Woods, renowned screenwriter John Yorke examines the mechanics behind story structure. He argues that, while the subject of the story (the protagonist) might not get what they initially wanted, they achieve the thing that they actually needed, and that is far more valuable.

The reason for the success of this type of structure is that it mirrors an insecurity that lies at the heart of all human beings. Built within our psyches is the belief that we are the underdog facing the challenges of the world. Different types of stories resonate with different target audiences, but the underdog against the world resonates with us all.

Related: Check out how we helped GoDaddy celebrate entrepreneurs achieving against the odds, in this corporate video production case study.

The paradox of the online world is that, while it has never been easier to reach an audience, it’s still difficult to connect with them. There is so much noise in modern communications, but great stories give you the opportunity to reach past your audience’s overstimulated heads and reach their hearts. Emotive stories do this. Used effectively, they enable you to get people to take note and remember what you want them to. And as your video communications agency partner that would be our job (in a nutshell).

The facts that stories lace with emotional connections become far more memorable. Bear with me here… In the early days of Casual Films, I used to go to breakfast networking groups, to meet and learn from other entrepreneurs. At one meeting, the topic of the conversation was, “What makes great customer service?” As we went around the table, the various business owners present gave their two-cents’ worth: “Well, I think it’s about sharing my mobile phone number and then not letting it ring more than twice when they call” and “I think it’s about sending a card for your clients’ birthdays”. Each business owner took their turn to give their ideas. When it came to me, I had a story about something that had happened recently and was fresh in my mind.

“A good client of ours rang our office at 4pm on a Tuesday afternoon. They had a very important pitch, and, for one reason or another, the film that they had been waiting for from their internal video department hadn’t come. She told me that the pitch started the next morning at 9am, and it would be severely compromised without the video. I told her not to worry and that if it was humanly possible, we would get it done. Four of us stayed and worked until 2.30am, finished the film and sent it over to her. She played it and they ended up winning the business. “This is what I think is good client service.”

About a year later, I was at a conference and I introduced myself to one of the other delegates. I was slightly taken aback when he said, “I know you; you’re the guys who are really good at client service.” He had been at that networking group, and had heard the story I shared. It had stuck in his mind long after the associated facts of the rest of the group had faded. I’m telling you this to illustrate the enduring nature of information that has been made to resonate with a broader narrative.

Making the intangible tangible – brand, values and the ‘foundation myth’

The previous example illustrates another key asset of stories in the business context: they allow the communicator to make relatively intangible ideas – such as customer service, brand or values – tangible. It can be challenging to communicate what is meant by an abstract brand slogan. If the communicator builds that definition out with a story, it gives it a form and context that is accessible and ‘sticky’ (or memorable). In this example, the relatively abstract concept of ‘customer service’ is given a clear form through a simple story.

Apple’s iconic ‘Think Different’ slogan is perfectly encapsulated by Ridley Scott’s equally iconic 1984 commercial for the launch of the original Mac computer (even though the slogan itself didn’t feature for the company until 1997). The spot features hundreds of drone-like, monochrome men in boiler suits all captivated by a large, Big-Brother-esque face on a screen in front of them. From the back of the room, a young woman in a running kit, including red shorts, runs in and hurls a large hammer at the screen, destroying it. It ends with a voiceover saying, “Find out why 1984 is not going to be like 1984” – a clear, if implicit, punch at the established order represented by IBM. Anyone who saw that ad could see the essence of what Apple stood for then and what it continues to stand for now. To explain what was meant by the slogan could have taken many hundreds, if not thousands, of words, but video allows it to be captured and understood simply, in a handful of seconds.

This attribute makes the format really useful for internal/employer communications. Every company now has a set of values, which it expects its staff to live their working lives by. These values are far more effectively communicated through a story than a slogan. A value with a story becomes a behaviour. A behaviour is easier for the employee to understand and act on. Saying, “This is what we mean by excellent customer service, integrity, give more, etc.” is a great way to get staff to exhibit those values. Video is an effective way of illustrating these stories to them.

The powerfully aligning nature of narrative is part of the reason that foundation myths hold such a powerful sway in the business world. Yes, the company may now be a global behemoth, but, once upon a time, it was just a small group of people with an idea and a desire to go against the system. These founders faced almost impossible odds (conflict/jeopardy) but overcame them with guile and a belief that what they were doing was right. No matter how large and successful the company becomes, there will always be the underlying narrative, which can be mythologised, and used to engage and motivate staff and other stakeholders.

Start crafting your own company narrative with the help of our video production services. We’d love to help you share your story!

If you find this interesting check out Nick's book: The New Fire - Harness the Power of Video for Your Business. You can preorder it here. 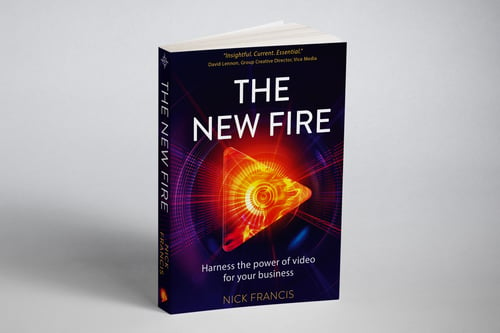